This looks like a fun with Photoshop, or maybe a snapshot from some parallel universe where the dead icons of the 20th century hang out together—even Elvis Presley and Richard Nixon. 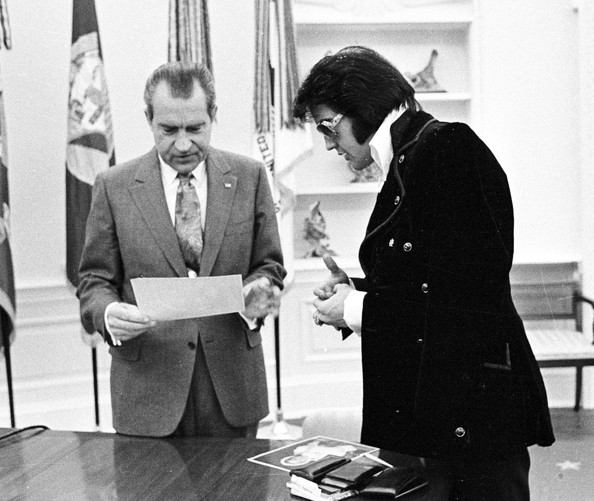 But the picture is genuine, an official White House photograph of a bizarre encounter that occurred in this universe, in the Oval Office on December 21, 1970.

In Memphis a few days earlier, when Elvis’ father, Vernon, and wife, Priscilla, complained that he’d spent too much on Christmas presents—more than $100,000 for 32 handguns and ten Mercedes-Benzes. Peeved, Elvis drove to the airport and caught the next available flight, which happened to be bound for Washington. He checked into a hotel, then got bored and decided to fly to Los Angeles.

“Elvis called and asked me to pick him up at the airport,” recalls Jerry Schilling, Presley’s longtime aide, who dutifully arrived at the Los Angeles airport at 3 a.m. to chauffeur the King to his mansion there.

Elvis was traveling with some guns and his collection of police badges, and he decided that what he really wanted was a badge from the federal Bureau of Narcotics and Dangerous Drugs back in Washington. “The narc badge represented some kind of ultimate power to him,” Priscilla Presley would write in her memoir, Elvis and Me. “With the federal narcotics badge, he [believed he] could legally enter any country both wearing guns and carrying any drugs he wished.”

After just one day in Los Angeles, Elvis asked Schilling to fly with him back to the capital. “He didn’t say why,” Schilling recalls, “but I thought the badge might be part of the reason.”

On the red-eye to Washington, Elvis scribbled a letter to President Nixon. “Sir, I can and will be of any service that I can to help the country out,” he wrote. All he wanted in return was a federal agent’s badge. “I would love to meet you,” he added, informing Nixon that he’d be staying at the Washington Hotel under the alias Jon Burrows. “I will be here for as long as it takes to get the credentials of a federal agent.”

After they landed, Elvis and Schilling took a limo to the White House, and Elvis dropped off his letter at an entrance gate at about 6:30 a.m. Once they checked in at their hotel, Elvis left for the offices of the Bureau of Narcotics and Dangerous Drugs. He got a meeting with a deputy director, but not approval for a bureau badge.

Meanwhile, his letter was delivered to Nixon aide Egil “Bud” Krogh, who happened to be an Elvis fan. Krogh loved the idea of a Nixon-Presley summit and persuaded his bosses, including White House Chief of Staff Bob Haldeman, to make it happen. Krogh called the Washington Hotel and set up a meeting through Schilling.

Around noon, Elvis arrived at the White House with Schilling and bodyguard Sonny West, who’d just arrived from Memphis. Arrayed in a purple velvet suit with a huge gold belt buckle and amber sunglasses, Elvis came bearing a gift—a Colt .45 pistol mounted in a display case that Elvis had plucked off the wall of his Los Angeles mansion.

Which the Secret Service confiscated before Krogh escorted Elvis—without his entourage—to meet Nixon.

“When he first walked into the Oval Office, he seemed a little awe-struck,” Krogh recalls, “but he quickly warmed to the situation.”

While White House photographer Ollie Atkins snapped photographs, the president and the King shook hands. Then Elvis showed off his police badges.