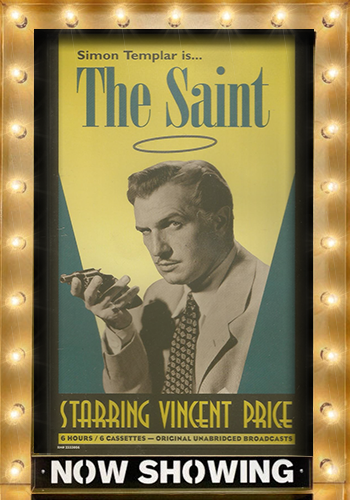 The Saint was first brought to life on the radio in 1940 by Terence De Marney (aka Terrance De Marney) on Radio Athlone. It was then a five-year wait before NBC picked up the option, and featured Edgar Barrier as Simon Templar, alias The Saint. Later in 1945, Brian Aherne took over the role when the show switched over to CBS. Then in 1947, probably the most famous Radio Saint of all-time, Vincent Price, added his golden voice to the role. Vincent Price was once quoted as saying the most difficult thing about the show was coming up with new and unique ways to get conked on the head. After a large number of episodes, Price finally left and his replacement Barry Sullivan only lasted a few episodes before the show was cancelled. It was resurrected due to public demand, with Vincent Price returning to save the day. In 1951, Tom Conway (George Sanders’ brother), of The Falcon fame, played The Saint for the last few episodes, with Lawrence Dobkin stepping in for a single episode when Conway was unavailable. Between 1953 and 1957, Tom Meehan starred as The Saint on Springbok Radio in South Africa (in English) with fresh adaptations of the original Charteris stories. It wasn’t until 1995 that the Saint returned to radio with new episodes, with Paul Rhys portraying The Saint in three scripts taken directly from the orginal Charter is stories.

We travel back to 1949 to enjoy the first episode of The Saint Starring Vincent Price.

“The Case Of The Unhappy Homicide” – Simon is confronted by a man who claims to have killed his business partner and wants Simon to prove he’s guilty because the police don’t believe him. Following that meeting, Simon is then confronted by the partner who is supposed to be dead, but later actually is murdered.

“Monkey Business“ – Simon is confronted when a couple murders including a monkey causes a maze of mystery and chaos .  Can Simon find out why the monkey was so important and catch the murder.  Find out in this edition of the Saint, Starring Vincent price.