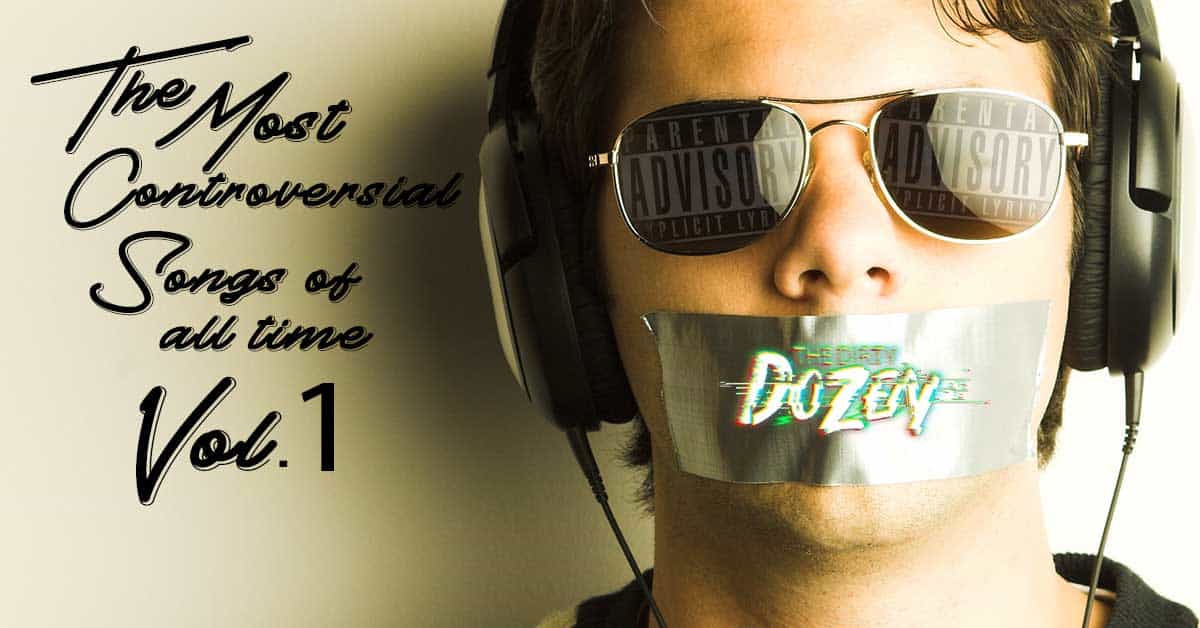 This is the Dirty Dozen.

The Bright lights of the stage sometimes blur the backstage antics or even drama of the world we live in. Remember controversy creates cash. All entertainers and celebrities know, sometimes being on the bad side of TMZ is better than no publicity at all. When it comes to questionable songs lyrics, themes or content that’s certainly the case.

The more insane the better. Right? There are plenty of entertainers and bands who thrive on pushing the envelope and drawing attention themselves for being a little naughty, scary or flat out crazy.

Let’s do a Double dozen of some of the most controversial works and moments of all time.

The Sex Pistols save the Queen

As fans know, the Sex Pistols were truly controversial. There is plenty of reason to believe it was all an act since John Lydon (aka Johnny Rotten) has managed to do quite well in the mainstream – after the fact. But… Suggesting Queen Elizabeth II’s monarchy was actually a “fascist regime” invited problems, and the BBC refused the song to be played in the United Kingdom. We all know that if you take a stand a say this is “Banned” song will not be played now everyone wants to hear it. So of course, the song reached the top 5 in the U.K.

Prior to Princes death in 2016, Prince reportedly stopped playing Sexy MF live. Mostly because of the spelled out version on the refrain of the title. Obviously, the song was edited for radio play if it was played at all, along with the video. There have been other questionable-themed Prince songs (Darling Nikki), but this might be the most memorable of the bunch.

While “Crazy Train,” Mr. Crowley” and “I Don’t Know” are arguably some of the most memorable tracks of Ozzy’s stellar Blizzard of Ozz solo debut, “Suicide Solution” was no doubt its most controversial. Mostly because the parents of teenager John McCollum sued the singer and CBS Records after the boy committed suicide – allegedly because of the song. In the end, there was never proof the song was responsible for the tragedy.

Swifty Nation No likey Mr. West. Any issues with this Ye hit comes from the profanity-laced lyrics directed at pop superstar Taylor Swift. Of course, music fans should remember when West bum-rushed the stage during Swift’s acceptance speech at the 2009 MTV Video Music Awards. His lyrics address that issue and left many fans – on either side of the situation – left scratching their head as just another controversy surrounding the famed rapper

Boy they truly are one in a million

Once dubbed the “World’s Most Dangerous Band,” G n’ R were no strangers to controversy. Back in the late ’80s, G N’ R Lies record, made waves for some homophobic, racial and anti-police that Rose had no problem defending as just the way he was thinking when he first came to Hollywood from Indiana with one in a million. Wonder how Slash felt about that?

During these rather turbulent times were social justice and police brutality have become prominent, N.W.A’s most infamous song “F@#$ The Police” has also seen a resurgence. A protest song against police brutality and racial profiling, message has become more than a song. It’s a piece of pop culture and those passionate about the cause, a rallying cry that’s been seen on posters during recent protests in the wake of George Floyd’s death and Breonna Taylor.

Back in the 1970s, songs about birth control were not common. So, when the legendary country star released this track, heads certainly turned. Numerous country radio stations refused to play this song about a woman doing something about her husband continuously getting her pregnant. Of course, with controversy comes popularity. The song reached No. 70 on Billboard’s Hot 100.

You know Madonna had to make this list…but for this?

The queen of pop music controversy. That had suburban moms wincing and radio stations wondering if they should play her music. However, the Material Girl’s tale of teen pregnancy – and what to do about it – stands out among the rest. Looking back, the subject matter seems rather tame, but back in the 1980s, when radio and MTV were impressionable on teenagers, it was quite the big deal.

So drug references and sexual innuendo can be a smack in the face to fans that still think little Hannah Montana still has her Disney ears proper. Some fans just did not want Miley to grow up and develop a more adult image. But… Let’s face it, the Hannah Montana days are over, and it’s OK that she’s singing about “Molly” (at least we think) or “Trying to get a line in the bathroom.” Those lyrics from one of Cyrus’ biggest hits. This caused a social media spectacle as well as got the video pushed to the moon on MTV based on the shear shock value alone.

Closer to god but not the radio

Trent Reznor and NIN’s most popular and widely recognized song. It was a radio hit back when alternative music was ruling the mainstream. Now, the radio version was edited/censored, due to its obscene chorus regarding, what allegedly, deals with sexual lust. Nonetheless, it took Reznor to new heights and helped The Downward Spiral become one of the biggest albums of the 1990s.

Now, this Peter, Paul and Mary classic is not controversial in the sense of creating an uproar. Rather, its somewhat hidden meaning involving marijuana use. “Puff,” the character Jackie Paper, as in “rolling papers.” Get it? The song was written by band member Peter Yarrow, and taken from a poem by Leonard Lipton. Both parties have denied any indirect references to drug use, but this was the 1960s, so it would be easy to see the questioning.

Controversy is no stranger to The Chicks, during the peak of country trio’s success, this was truly attention-grabbing. A story about domestic abuse. A woman, who gets her revenge – with the help of her best friend – by poisoning her husband. Obviously not the way to solve such a serious issue, but the sense of female empowerment was a hit with the band’s female fans – at the time. The star-studded video added to the attention.

This English electronica band might very well be responsible for the most controversial song ever recorded. In many ways, that was the intention for a group that otherwise enjoyed some modest success in the United States. The title opens the door to problems, and the lyrics only reinforce a theme of sexual excess and aggression. The band was entirely dismissive of the contention, reportedly saying it was more about “intensity” than anything else. OK?