Welcome to The Dirty Dozen.  This Week its THE LIST. In no particular order we look at 12 of the most requested, most popular and #1 songs from New Jersey’s own …

Bon Jovi have consistently been one of the most successful record-selling and arena-filling rock acts of all time. Their roots deep in the glam and pop metal scene of the early-’80s. They have kept cranking out hits, selling out shows long after most bands have long since faded away. This is due in part to the strength of their songwriting. 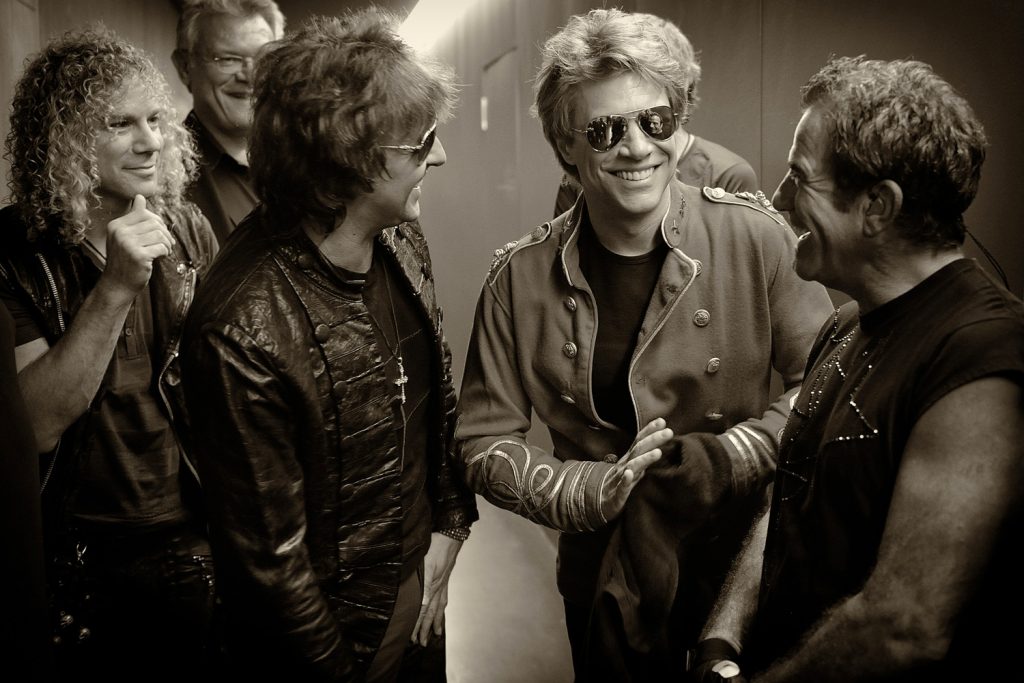 Of course it didn’t hurt that the Jersey rocker’s face launched a thousand teen magazine covers back in the day. Plus Jon Bon Jovi is one of the world’s savviest self-marketers. I mean let’s face it, a great voice and a way with a song hook didn’t hurt either. Bon Jovi’s catalog is vast. Even their later work has veered away from their traditional sound to explore pop, adult contemporary and even country music, our list of the Top 10 Bon Jovi Songs celebrates the classic-rock roots of the band.

Bon Jovi’s Slippery When Wet set the stage for the meteoric rise to legendary rock status. Slippery When Wet featured three of their biggest hits. But “Wild in the Streets” is a tale of youthful shenanigans that draws from the bands history in New Jersey.

“I’ll Be There for you,” became the group’s fourth No. 1 single.

“In and Out of Love”

“Lay Your Hands on Me” I can picture in my mind. The Rumble of the Stadium. The fist-pumping chant of “Hey!“. This song was written around Sambora’s guitar riff while the group were in the studio recording. This was the fourth single from New Jersey and went to No. 7 in the Billboard chart.

“You Give Love a Bad Name” gave Bon Jovi household names. Written with Desmond Child, the song starts “Shot through the heart, and you’re to blame / you give love a bad name.” This gave Bon Jovi their first No. 1 hit and certainly qualifies as one of the Top 10 Bon Jovi Songs.

“Bad Medicine” was the first single from New Jersey, and it helped bridge the gap between the band’s hard rock past and more melodic future. Heavy enough to satisfy the group’s rock fans and pop enough to win mainstream fans, the track landed at No. 1 in the Billboard chart.

“Runaway” contained the now-iconic falsetto part at the end of the song. The track actually hails from a batch of demos that featured a different group of players — most notably Rick Springfield guitarist Tim Pierce, whose inimitable style is unmistakable.

Few songs are more iconic than “Wanted Dead or Alive.” Though it’s not one of Bon Jovi’s No. 1 hits, this song began Jon Bon Jovi’s lyrical love affair with cowboy imagery, drawing an analogy between the life of an Old West outlaw and a touring rock musician. Sambora’s acoustic riff, guitar solo and backing vocal are essential elements of the track.

There are hits, and then there are career songs. “Livin’ on a Prayer” is Bon Jovi’s career song, the story of Tommy and Gina — a hard-working pair of young lovers and all of the challenges life throws their way. He’s been on strike, and she “works the diner all day,” but it doesn’t matter, as long as they have each other. Bon Jovi’s second No. 1 hit and has since become their signature anthem.

The power ballad was allegedly recorded by Jon Bon Jovi because Emilio Estevez requested Bon Jovi’s song “Wanted Dead or Alive” for the soundtrack to Young Guns II, but Bon Jovi did not think the lyrics — about the band constantly touring — fit the theme of the Western movie. However, the request inspired him to write “Blaze of Glory” with lyrics more topical to the film.

The song features a music video and remains a crowd favorite with Bon Jovi fans, despite the fact that the song was not released as one of the band’s singles, and only by Jon. The track is notable for the performance of Jeff Beck on guitar. The music video was filmed at The Rectory near Moab, Utah.

“Bed of Roses” gave them new life, long before “It’s My Life” cemented them as a band who’s never going away. They had nothing to prove at the time, so they did this instead. As usual with Bon Jovi, what a chorus. But, really this time: what a chorus.

“It’s My Life” charted in over 20 countries. It was nominated for both a Grammy and Echo Award and was the third best-selling song of the year 2000.  Interesting to note is that a cover of this song (in conjunction with Usher’s 2004 track “Confessions”) by the cast of the television musical “Glee” actually reached number 30 on the Billboard Hot 100 in 2009. And for the record, in terms of the Hot 100 it performed even better than Bon Jovi’s original, which peaked at number 33.

check out some new music from Bon Jovi.  Here is Limitless