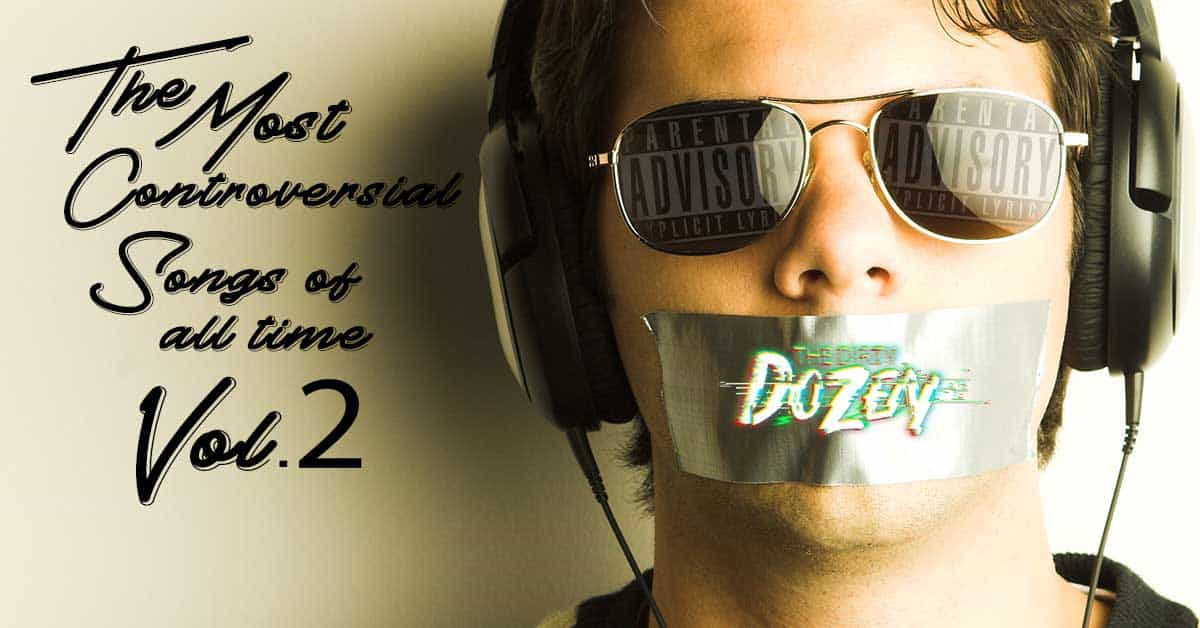 The Bright lights of the stage sometimes blur the backstage antics or even drama of the world we live in. Remember controversy creates cash. All entertainers and celebrities know, sometimes being on the bad side of TMZ is better than no publicity at all. When it comes to questionable songs lyrics, themes or content that’s certainly the case.

The more insane the better. Right? There are plenty of entertainers and bands who thrive on pushing the envelope and drawing attention themselves for being a little naughty, scary or flat out crazy.

Let’s continue this Double dozen of some of the most controversial works and moments of all time.

The lines got blurred

In addition to Thicke, Pharrell Williams and T.I., and even the late Marvin Gaye, all played a part in the crooner’s biggest hit. However, the writing credits were another controversy all together. As far the lyrics go, some suggested they were misogynistic and demeaned women. Thicke played down that thinking, especially since the song hit No. 1 in more than 20 countries.

Back in the 1980s these English alt-rockers XTC caused quite the stir. The anti-religious there was meant by singer/songwriter Andy Partridge to send a “free-thinking” message about God and religion, in general. Partridge reportedly received death threats because of the song “Dear God”, which touched a nerve among plenty of conservatives around the world.

Killing in the name of rage

Arguably Rage’s most notable song, another that attacks police brutality and systemic/institutional racism.. It also features some of Tom Morello’s best guitar work. Interestingly, the song seem to draw more ire internationally than within the United States. Guess U.S. fans just expect this from RATM

With all the talk regarding the confederate flag. With help from LL Cool J, the song is about Southern pride, but from the standpoint of trying to be proud of living in the south, and not because of those confederate issues from the past. It’s a fine line that is still being walked today – for better or worse.

Nirvana often stayed in the public eye during its heyday. Of course, mostly because of troubled, late frontman Kurt Cobain. Although, when it came to the band’s actual music, none drew more ire than this track off its final studio album In Utero. The title of the song alone raised eyebrows, but the group, especially Cobain, had always suggested it to be an anti-rape song from the viewpoint of the victim.

Mashall Mathers to the office

Eminem recruited British songstress Dido to help out on this massively popular single from The Marshall Mathers LP. Many critics and fans believe it’s Eminem’s best song – and video. However, the story of an alleged obsessed fan, who tied up his pregnant significant other, put her in the trunk of his car and drove into a river while drunk, was quite graphic. Eminem is a great storyteller, but this is rather haunting.

Born to have American Skin

Bruce Springsteen has never been shy about speaking his mind. However, he took a lot of heat for his musical portrait on the fatal NYPD police shooting of Amadou Diallo.While the song was praised by critics and the NAACP gave Springsteen its Humanitarian Award, the New York City police were not happy with song. The Patrolmen’s Benevolent Association called for a boycott of the force’s presence during The Boss’ 10-night Madison Square Garden stint in June 2000 – after the song was premiered live earlier in the year.

A trip back to when Ice-T went metal with this band. Much like N.W.A.’s police-related track, “Cop Killer” is considered a protest song toward police brutality. It’s obviously taken on a resurgent meaning in America’s certain climate, but it natural was attacked by politicians (President George H. W. Bush) and censorship activists (Tipper Gore) because of its title. Interestingly enough, Ice-T went on to play a detective in the popular Law & Order: Special Victims Unit.

Slayer and the Nazi Experiments

Slayer is known for complex lyrics, especially when it came to historical-based themes. Perhaps no song in Slayer’s catalog ruffled more feathers than this cut off the legendary Reign in Blood album. Penned by late guitarist Jeff Hanneman, the song is about Nazi doctor Josef Mengele’s “experiments” at the Auschwitz concentration camp. Some believed this was a pro-Nazi piece, though the band has denied that notion from the start and kept it as a staple of its live sets.

Relax don’t do it

Frankie Goes to Hollywood’s hit song “Relax” hit the top of the charts due to the buzz generated by DJs declining to play it. Released in 1984, the track barely made an impact commercially – until a DJ in England, outraged by the lyrics and cover art, refused to play it; the BBC followed suit. The song’s sexually suggestive imagery also prevented it from receiving airplay.  The song quickly became a number one hit. The video helped propel the song and fuel its controversy as well.

“If U Seek Amy,” Britney Spears

This controversial single whose chorus and title sound like “$%#& me” when sung, was censored in the U.S. and the UK. Initially unsure on whether the double entendre was in fact censorship material, U.S. radio stations changed the title to “If U See Amy” and BBC radio simply changed it to “Amy.” This was after the Parents Television Council (PTC) threatened to file complaints against the FCC if the track was played. These threats were extended to cable music channels, but they were not taken seriously.

George Michael had a history of creating music dealing with the topic of sex, but “I Want Your Sex” was arguably the most direct. The BBC banned the song and music video upon its 1987 release, but Michael was way too popular at the time for the censorship to last.

Michael revealed he wrote the song in response to the AIDS epidemic.

“The media has divided love and sex incredibly,” he said. “The emphasis of the AIDS campaign has been on safe sex, but the campaign has missed relationships. It’s missed emotion. It’s missed monogamy. ‘I Want Your Sex’ is about attaching lust to love, not just to strangers.”

The first single these Hall of Famers released is still their most controversial. Frontman Robert Smith has said the song “Killing an Arab” is a condensed take on the 1940s French novel L’Étranger (The Stranger). The song earned some public wrath considering it describes the shooting of an Arab person on a beach. Many felt it was anti-Arab at the time, and the controversy resurfaced in the wake of the September 11 attacks.